Chocolate Cake And Verity Toppings To Choose From 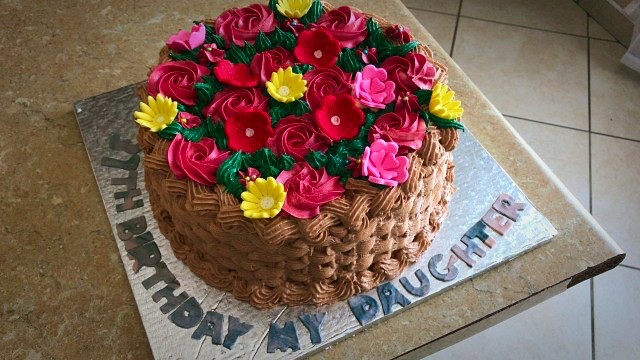 Beat for a while then pour mixture into baking tray and bake at 180 for 30 minutes Deco with fresh cream and ganache or decorate with butter icing Icings
Here's all the icing recipes;)

Strawberry icing :
500g castor sugar, 160ml water, 4 egg whites, 5ml strawberry essence, 2 drops red food colouring.
Combine sugar and water in a small pot. Stir over heat, without boiling, until sugar has dissolved. Boil, uncovered, without stirring for about 5 minutes until sugar is thick. Take care not to scorch the syrup and change its colour. Remove from heat.
In a large bowl, add egg whites and beat with electric mixer until soft peaks form. While beating egg whites, add hot syrup in a thin stream and continue to beat at a high speed until mixture is thick and frost like.

Caramel topping for cinnabon or walnut cake :
50g butter, 60g soft brown sugar, 12ml golden syrup, half tin condense. 25g milk chocolate.
Heat butter, sugar, syrup and condense milk over low heat,stirring continuously, till a golden caramel colour. Remove from heat and add chocolate; stir till chocolate melts,use while to spread over cake. Omit chocolate and pour while hot over cinnabon as soon as it comes out the oven.

My Way To Health Rotis

★ 5.0 (@saadia_b_)
Chocolate Cake And Verity Toppings To Choose From is part of the Cakes recipes category